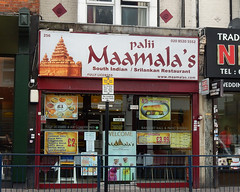 Small Sri Lankan and South Indian restaurant on Hoe Street in Walthamstow, near Walthamstow Central Station. It was previously known as Priya photo.

Inside, the walls are painted cream and adorned with nothing more than a few small mirrors. Subtle lighting comes from recessed spotlights all around the ornately moulded edge of the ceiling. A wide aisle runs down the centre of the room from the door to the bar, with tables for 2-6 people set on either side, covered with white and burgundy linen tablecloths. Chairs are high-backed dark leather. There's seating for about 32 people in all, plus a small waiting area opposite the bar for people ordering takeaway; there may also be another room upstairs.

The menu photo as of Sep 2017 is quite large, with plenty of vegetarian options. They have a good range of Sri Lankan kotthu dishes such as kotthu roti, string hopper kotthu, and pittu kotthu. They are licensed to serve alcohol, and they have Lion Stout. According to a sign on the door, all the meat they serve is halal.

Kake first visited on a Monday early evening in October 2009. When I arrived around 6pm there were only two other customers, but there were several phone calls for takeaway during my visit. Instrumental piped music was playing, not annoying and not overly loud. The lights were low when I arrived and turned down even lower while I was there, to the point where it was a little tricky to see what I was eating.

I had the vegetable kothu roti (a stirfry of chopped flatbread with spices and vegetables, £5). Offered the option of mild, medium, or spicy, I chose spicy. Pleasingly, it actually was spicy, with the kind of heat that builds as you go on. It was near the top of my tolerance level, and might even have been hot enough for bob. It wasn't my favourite of the kotthu rotis I've eaten — the roti pieces were larger and doughier than I would have wished for — but overall it was fine.

Kake visited again on a Thursday lunchtime in August 2011, arriving around 1:30pm. There were no staff in evidence when I arrived, so I hung about for a while and eventually seated myself — when a staff member did turn up, he seemed fine with this. Indian instrumental music was playing, as on my last visit not too loud.

I had the mini vegetarian thali (£5) photo — this was a lunchtime-only special not advertised on the menu (nor anywhere else I could see). I wasn't asked what spice level I'd prefer this time, but it turned out to be well within my tolerance. It did take nearly half an hour to come, even though there were only two other customers, but it was worth the wait.

It was all pretty good. The rasam (thin soup) was nicely tangy, the dal was well-textured and well-seasoned, the potato-based curries weren't bland, and the aubergine curry was quite intense and oily, a good contrast to the other dishes. The poppadom was fresh, the rice was an ample portion with well-separated grains, and the bread was wonderfully fresh and flexible, neither doughy nor overcooked.

Kake visited yet again on a Thursday evening in September 2017. This time I had the full vegetarian thali (£9) photo, which included four vegetable dishes, sambar, rasam, yogurt, pickle, rice, freshly-cooked chapathi, poppadom, and halwa for dessert. Again, it was all pretty good, and all the dishes had distinct flavours.

Kake's verdict: I've been three times now (partly because it's so convenient for Walthamstow Central Station) and would happily come back.

Accessibility: A step to get in. Once you're in, there's no further steps to seating or toilet, though access to the latter (a single unisex cubicle with grab bars and too-short alarm cord) is a bit narrow.