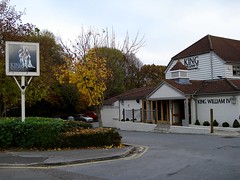 Pub in Chigwell, near the station.

It's owned by Mitchells & Butlers, and as of mid-2012 is part of their Premium Country Dining Group sub-brand, though it's previously been a Harvester among other things. (Note that we aren't sure which sub-brand it was in during the 2008 visit described below, except that it definitely wasn't a Harvester at that point.)

The back part is more of a restaurant than a pub, including one long table for large groups. The front part is more for drinkers, and there's also a little room with sofas just off to the right as you go in photo. There's a patio area outside as well.

Kake and James visited on a Monday evening in March 2008. We were almost put off coming in here as the music sounded quite loud from outside; but then we realised that they pipe the music out to the patio area. It wasn't actually that bad once we got inside.

We also tried a couple of their pizzas (£6.50 for a margarita and £1 for each extra topping chosen from pepperoni, chorizo, jalapeno, mushrooms, onions, olives, or peppers). They weren't actually bad; the bases were thin and fairly tasty (though a bit floppy), and the cheese was proper mozzarella (and not too much of it).

According to their website as of September 2012, food is served noon-10pm Mon-Thu; noon-10:30pm Fri-Sat; and noon-9pm Sun, from a menu shared with other pubs in the Premium Country Dining Group.

Kake's verdict: Would probably come back if I was in the area, though I don't know what the atmosphere is like normally since the place was fairly empty on our visit.