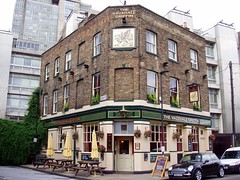 Pub in Vauxhall. It was previously known as the Vauxhall Griffin (pictured), but according to the Oct/Nov 2018 London Drinker has now had a change of ownership and been renamed to the Griffin Belle.

We haven't visited since the change of ownership, and so some or all of the details below may be out of date.

bob visited early on a Thursday evening in September 2009. There were a few people in but there was still seating.

They had Spitfire on handpull (£1.50/half-pint), which was drinkable.

Accessibility: There is a disabled toilet, though at the time of my visit it was blocked by some folded up A-boards.