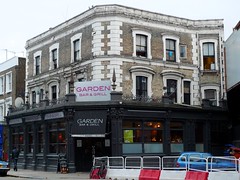 There's an interesting mosaic on the floor by the bar, and a raised area at the far end with sofas. Out the back is a large garden, mostly if not completely covered over.

Kake, Bec, Ewan, and other Tube Walkers visited on a Sunday afternoon in October 2013. There were a fair few other people in, all watching the football on a large pull-down screen in front of the bar, but we had no trouble finding a table out of view of the screen. The garden area was entirely empty. The lighting was quite dim, and turned down further while we were there.

Real ales on offer were Sharp's Doom Bar and Sambrook's Wandle (one of these at least was a rather expensive £4/pint). They didn't have any Strongbow. A pint of lime and soda was £1.50.

We all shared a bowl of fries (£4) photo; they were fine, and certainly an ample portion. Mayonnaise and ketchup were brought automatically, though no vinegar.

Accessibility: A small step (about an inch) to get in. Step-free to the toilets, bar, and most of the seating once you're in. Some of the interior seating is up two large steps. There are also two large steps to get into the garden.