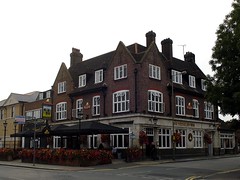 The inside is divided into two halves. The one on the left, entered from the front of the pub, is almost like someone's living room - in a good way; worn rugs on polished floorboards, comfortable brown leather sofas, and a spacious feel.

Kake visited on a Wednesday early evening in September 2008. Beers available were Gales Seafarers (£2.85/pint - note that despite the name this is actually a Fuller's beer), Discovery, Pride, and ESB. I sat in the left-hand side and it was quite peaceful; there were about half a dozen other people in, reading the newspaper or having quiet conversations. The other side of the pub sounded a good bit livelier. Music was playing quietly.

There's seating outside for the smokers, covered with large umbrellas.

It has a Thai restaurant upstairs; not sure if you can order food to be served in the pub part. According to the Fuller's website as of September 2008, food is served noon-10pm every day.

Accessibility: I failed to take proper notes, and have been in too many pubs since, but I'm 90% sure there's step-free access to the bar, seating area, and toilets - though I couldn't swear to it --Kake