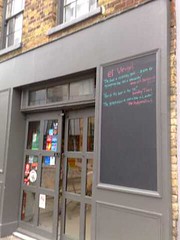 According to [SE1] this has moved to larger premises at 132 Webber Street, SE1 0QL.

Latin American cafe in Borough. It has two tables in the centre and bar seating around the edge. It's quite trendy.

secretlondon visited on a Saturday in November 2008. Quiet music was playing.

Note that they don't take cards. They do takeaway, and will deliver locally if you order before 11am and spend over £15. They do breakfast too.