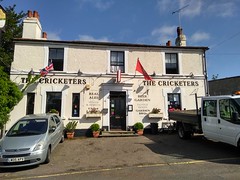 It has wood paneling around the sides, and wooden beams on the ceiling. There's mostly banquette seating around the wall photo and high stools at the central bar. An extension at the back is home to a dartboard, and there's a part-grass part-paved beer garden at the back with picnic benches photo.

bob has visited twice now, most recently in June 2019. In June 2011 the real ales were Wadworth 6X (£3.30/pint) and Adnams Broadside, while in June 2019 they only had Sharp's Doom Bar (£4.20/pint), though there were a couple of clips turned round, including London Pride.

When I arrived at 5pm on a Thursday early evening in June 2019 there were about six locals in having conversations. The cricket world cup was showing on a TV.

Accessibility: A couple of steps to get in. Level to the toilets and beer garden once you're in. There is a side entrance to the garden with a ramp which might offer step-free access to the bar, but we haven't checked if the gate there is ever opened.