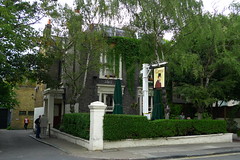 It's run by Convivial London Pubs, an offshoot of the Capital Pub Company. Inside, it's divided into a number of areas; the front bar part has a mix of seating including a couple of high chairs at a high table, while further back is a cosy area with little nooks, and a conservatory dining area which seats 35 and is set with cutlery and linen napkins. There's a covered, heated outdoor seating area at the front. A selection of board games is available from a cabinet opposite the bar.

Kake, Ewan, and other Tube Walkers visited on a Sunday afternoon/early evening in September 2009. Real ales available were Adnams Explorer, Hogsback HBB (£2.95/pint), and Hogsback TEA; Harveys Sussex Best came on later in the evening too. They also had the keg version of Greenwich-brewed Meantime LPA.

On our September 2009 visit, four of us were eating, and so we asked if it was OK for us to sit in the dining area since the table we were drinking at wasn't very big. They said they'd have to check the bookings, but it was early (right at the start of the food serving hours) and we were swiftly shown to a table. Water glasses were already set out, and a jug of tap water arrived soon after we sat down.

We ordered a couple of dips to share as starters — hummous and pitta (£3.50) photo and baba ganoush and pitta (£3.50); we were a little surprised to be asked after this if we wanted even more bread "for the table". We all liked the pitta, hot and slightly doughy in a good way. The hummous was OK, though neither garlic nor lemon was evident, and the texture was a little stiff. The baba ganoush wasn't great either, with none of the smokiness it should have had. (Pub hummous/baba ganoush is never particularly good though, in Kake's experience.)

Mains were somewhat better, perhaps because they were more traditionally British. Ewan ordered one of the two vegetarian options, stuffed courgette wrapped in filo served with Napoli sauce (£10) photo. We were told that this was a new dish on the menu, and he was the first to order it; the sauce was a bit much, but the stuffed courgette itself was fine. Jo had some grilled halloumi from the starters menu photo, while Susannah was very pleased with her wild venison sausages with spring onion mash and chilli onion marmalade (£10.25). Kake went for the line-caught swordfish with nicoise salad (£13) photo. The nicoise salad was pretty good, with a decent dressing, nicely roasted potatoes, and perfectly soft-boiled eggs. Alas, the swordfish was overcooked and very dry; I ate a quarter of it and then gave up. The staff member who cleared our plates did enquire if there was anything wrong with it, and said she'd tell the chef my feedback, but we didn't hear anything back after that.

A sign spotted in September 2009 advertised a pub quiz on Wednesdays, £2 entry (winner takes all), starting at 8:30pm.