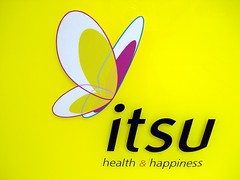 Itsu is a British chain, invented by Julian Metcalfe, the man behind Pret a Manger. In general, the quality is higher than at Yo Sushi. The fish certainly seems fresher.

Itsu branches on this guide (view them on a map):