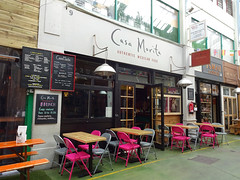 It's a small space — a single market unit with seating inside for around 25 (half of it on tall stools) and four more tables out the front in the glass-roofed market row. The floor is unfinished concrete, and exposed brickwork can be seen here and there. The walls are painted in a deep pink, complemented by the bright pink and light grey of the folding chairs that provide all the normal-height seating. Cutlery and paper napkins sit in old tomatillo cans on the varnished wooden tables.

Service was very quick, which was not surprising given that tacos were the only thing on the menu at that point but which did speak well of their level of organisation. (Since that first week, the menu has been expanded, changes regularly and has become much more vegetarian-friendly, usually with several extras on the specials menu.)

On a lunchtime visit in October 2011, itsbruce had a tomato salad (£3) and a vegetarian tostada (£4.50) photo. The tostada was possibly the best dish itsbruce has ever been served in a Mexican restaurant in London; the tortilla base was crisp and firm without being brittle, so that it could be cut into smaller sections with a knife but those pieces could then be lifted to the mouth with a hand and not collapse. A thin layer of black bean paste was spread across the tortilla, on top of which was a mixture of lettuce and goats cheese, coated in a creamy guacamole. The whole dish was absolutely delicious.

The tomato salad was fresh, crisp, and lightly but piquantly seasoned. With the addition of a bottle of Ossies ginger beer (which can be found in many of the Market Row and Brixton Village cafes and restaurants, £2.20 at Casa Morita), the final bill was £9.70. Service was still very fast, despite the larger menu and confirmed popularity of the venue.

When Kake visited on a Thursday lunchtime in May 2019, at their opening time of noon I was the first customer of the day, but another arrived shortly afterwards. Upbeat music was playing, not too loud. I ordered from their lunch menu (£9), which gets you two tacos to start and then either a tostada or "la torta" (a sandwich in a large bun) to follow.

Taco de cochinita pibil (pulled pork with spiced onions) photo of both tacos was perhaps a little too oily, but the pork had a good texture. I liked the inclusion of fat and skin (but the hairs on the skin less so). The filling of the taco de vegetales al chipotle was cooked very soft; it wasn't very spicy, just gently warming, and had a subtle smokiness. As itsbruce notes above, the tortillas were very good, with just the right amount of roughness to the texture, and robust enough to keep in the vegetable juices while remaining soft enough to easily bite through without losing filling through the other end.

La torta with queso fresco photo was quite simple-looking, but done very well. The bread was lovely — light without being insubstantial — and the filling of black beans, spinach, tomato, onion, avocado, and queso fresco all went together just right. I'd order it again.

Service was friendly and helpful. A large swing-top bottle of tap water was placed on the table as I sat down, without me having to ask. No service charge was added to the bill.

They used to have a brunch menu, usually offering huevos rancheros, huevos revueltos, and huevos divorciados, but we aren't sure whether they still do this.

itsbruce's verdict: This is Mexican cuisine, not at all Tex-Mex, and among the best to be found in London. The combination of high quality food and fast service make this a great stopping point on a night out in Brixton.