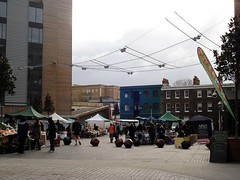 This weekly farmers market, held in Bermondsey Square just off Tower Bridge Road, was set up in November 2009 and originally known as Bermondsey Farmers' Market. It was run by London Farmers' Markets (LFM) until the end of 2011, at which point LFM decided to cease running a market at that location. However, the market has continued under new management, and as of 2014 is still going strong.

A small amount of hot food is available; the Polish stall does fried pierogi (the same ones that are available to take home and cook), and the two meat stalls offer bacon sandwiches and sausage sandwiches respectively. The market is really focused on shopping rather than grazing, though, unlike Borough Market.