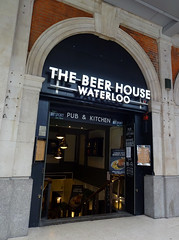 Pub in Waterloo Station, located in a basement opposite platforms 3 and 4.

Previously called the Wellesley photo, it was renamed to the Beer House some time in 2012.

It's actually not too bad for a station pub. Seating is a mix of tall stools, normal chairs and tables, and sofas.

bob visited on a Friday night in November 2008. When I arrived at 10:45pm, there were a few other customers in. Several TVs were on showing a music channel very loudly. A pint of Young's Bitter was fine at £3.10. The other beers on were Bombardier, Old Speckled Hen and London Pride. (Note that the range of ales has changed since the Beer House rebranding.)

On another visit by Kake and bob on a Friday early afternoon in April 2011, there were several other customers but plenty of choice of seats. Service was friendly. They again had four fairly standard ales on; a pint of Pride was £3.50.

It's worth noting that mobile phone reception is not great, due to the basement location.

Accessibility: The pub is down a flight of stairs with a sturdy handrail.