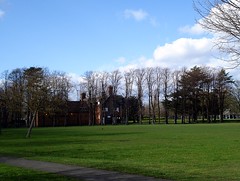 The building shown in the photo on this page (just to the southwest of the middle of the park) used to house Ashburton Library, but the library moved to other premises nearby in 2006. The building remained vacant and disused for some time, but was refurbished and brought back into use in 2017 as a community hall and events space called Ashburton Hall.