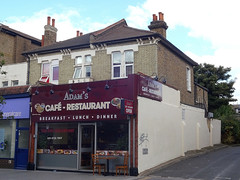 It's a fairly typical traditional British cafe, though following a mid-2016 refurbishment which saw the blue plastic chairs and beige formica tables replaced by a more upmarket wood effect, the ambience is now comparable to Golden Chefs Cafe down the road. Large mirrors line one wall, vintage photos and prints adorn another, and a couple of plants sit in large pots in a corner by the window. There's seating for around 30 in the front part and more up some stairs at the back.

Kake has visited several times, most recently on a Thursday lunchtime in February 2017. I generally come on a weekday, arriving around noon to 12:30pm, and there are usually only two or three other customers in. Service is always friendly (though it should be noted that the staff recognise me now, so that might be part of it).

An egg and bacon roll in March 2016 photo was fine, with a creamy (but not runny) yolk on the egg, decent enough bacon, and a soft roll with a gently crackly crust.

Accessibility: A step to get in. Fairly wide aisle between the door and the counter. The toilet (and some of the seating) is up some stairs to the back.