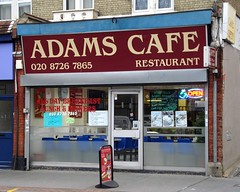 It's a fairly typical greasy spoon, less upmarket than Golden Chef's Grill down the road. The chairs are blue plastic, the tables are covered in beige formica, and the frontage is basically all window. Large mirrors line one wall, and a couple of plants sit in large pots in a corner by the window. Menus sit on each table, and the dishes on offer are further advertised via illustrated signs and a blackboard on the wall. There's seating for 36 people (9 tables of 4) in the front part and a further 24 up some stairs at the back.

Kake visited on a Saturday lunchtime in March 2012. There were only three other customers when I arrived around 12:30pm, one of them chatting to the staff member behind the counter.

Set breakfast 2 (£4.50) photo consisted of egg, bacon, hash browns, mushrooms, beans, two slices of toast, and tea or coffee. The egg was nicely done, with a runny yolk. The bacon was a bit tough, and a bit greasy; the hash browns were also a bit greasy. Mushrooms and beans were fine. I was very pleased with the toast, which was made with proper wholemeal bread (I could taste and feel the bran) rather than the caramel-dyed "brown" stuff; it was also pre-buttered, which I prefer.

Accessibility: A step to get in. Fairly wide aisle between the door and the counter. The chairs are fixed to the tables, but the table-chair combination is not fixed to the floor. The toilet (and some of the seating) is up some stairs to the back.