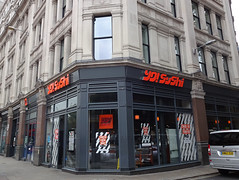 Kake visited on a Saturday afternoon (4pm) in July 2007, and it was pretty quiet despite the rather touristy location. It was actually quite nice for a Yo Sushi; although the quality was as mediocre as you'd expect from a Yo Sushi and the conveyor belt selection seemed to be focused heavily on the more expensive items, the staff were friendly enough and the place was mostly reasonably clean.

Kake visited again on a Saturday lunchtime in March 2014, as part of a group. The fried items we tried were rather greasy and bland, but the rest of it was OK. The people with various allergies in our group found the allergen-free options to be sufficiently plentiful to make a varied meal.