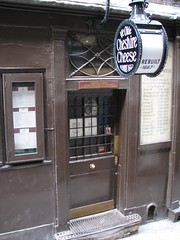 Samuel Smith's pub down an alleyway just off Fleet Street.

Unlike many Sam Smith's pubs, it actually has the Old Brewery bitter on handpump. Other beers are standard to the chain, although on an April 2014 visit it had the Samuel Smith's Dark Mild on keg.

The interior consists of several small rooms joined by passageways. There's very little natural light, adding to the atmosphere, and the darkest part of the pub is where one enters, to the right where there's an open fire. The rooms toward the back and on the several levels downstairs are larger, and felt very nice and cool on our visit on a warm spring day in May 2008, probably due to the stone floor sucking up the heat. Seating is available both in the small rooms and on benches along the passageway; it really does feel very olde-worldey. There's a restaurant area (The Chop Room) in one of the rooms near the front. Additionally, there are several levels of bookable upstairs rooms, which are sometimes open.

By repute, this is supposed to be the first building, or one of the first, to be rebuilt after the Great Fire of 1666. Certainly parts of the above-ground bit look that way to me.

Accessibility: Toilets are in the basement, down a narrow and winding staircase. There are two "Mind your head" warning signs on the staircase, and most people will have to duck to avoid the low ceiling.