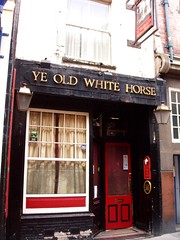 A pub just by the London School of Economics, in Holborn.

Its easy-to-miss side-street location and unassuming doorway suggest a tiny pub, but in fact this place stretches back reasonably far, with several tables up several steps at the back as well as a larger table by the front window, in a little alcove. Having said that, when it's busy, as it was on Ewan's December 2008 visit, the place can get pretty squashed, especially by the doorway.

There are four handpulls for ale on the bar, with Timothy Taylor's Landlord, Sharp's Doom Bar, Woodforde's Wherry and one other on Ewan's visits in both December 2008 and August 2009. They also have the usual lagers, and a small wine list on each table. Ale is well-kept, and the white wine was fine, though my friend was not particularly fond of the rosé. Service is very friendly.

Food is served in the evenings, and sticks to very familiar pub grub basics (burgers, ham egg & chips, nachos and the like). Ewan had a spinach & lentil burger (£5 and 50p extra for cheese), which was served in two doorstop slices of toast rather than a burger bun, and was all the larger for it, with plenty of chips on the side and a small salad. In fact it turned out to be one of the better veggie burgers I've eaten, with plenty of taste to the large slab of a burger pattie, and nicely complemented by the cheese. On another occasion, a cheese and pickle sandwich (£3.50) was again in doorstop slabs of bread, with pickle on the side photo, and a bowl of chips (£2.50 as a separate order, or £1 for a smaller amount with the sandwich) were well-fried. Jo's nachos were unpretentious and tasty and only £3.50 photo.