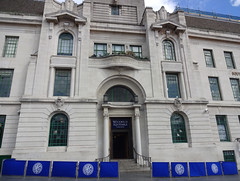 It's housed in part of the former headquarters of the Woolwich Equitable Building Society, with plaques in the entryway marking the building's original opening in May 1935 photo. Inside, it's a huge, stripped-out space filled with freestanding tables and chairs. Padded banquettes line the walls, and a mezzanine above the bar offers even more seating. A small wood-panelled snug tucked to one side has space for another 20 or so.

The characteristic Antic quirkiness is somewhat less in evidence than usual, with just the occasional floral armchair and row of old cinema seats to remind you where you are. An upright piano sits by the front door, and a shelving unit to one side holds board games and a bring-one-take-one book swap. Lighting is a little dim, but not obnoxiously so. The art deco ceiling is worth a look.

Kake visited on a Saturday lunchtime in September 2016. There was only one other customer when I arrived around 12:30pm, though several more arrived while I was there, including one group with a child. Music was playing, fairly laid-back, not too loud. Service was very welcoming, friendly, and helpful.

Five of the six handpumps were on, offering three real ales — Volden Pale Ale (£1.85/half), Belleville Northcote Blonde, Hop Stuff Fusilier — and two real ciders: Butcher's Boy Sweet Cider (£2.25/half) and Cockeyed Bushpig. They also had a few Sambrook's beers on keg taps. I initially asked about the Fusilier, but the staff member on duty warned me it might have been on too long; he tasted it and said it was vinegar, so turned the clip to indicate it was off.

In September 2016, Kake tried the spiced chickpea burger with tomato salsa and fries (£9.50) photo. The burger was good, delicately spiced inside and breadcrumbed outside, like a sort of dal croquette. The brioche bun was sufficiently structurally sound (though the burger didn't really present it much of a challenge). The fries were hot, crisp, and skin-on, and had a good flavour of potato. They were slightly oversalted for my taste.

According to their website as of September 2016, there's a pub quiz every Thursday, there's regular live music, children are allowed until 9pm, and they also allow dogs.

Accessibility: A half-flight of stairs to enter the building and another just inside. No steps to the toilets once you're in, and the cubicle doors in the ladies' open outwards.