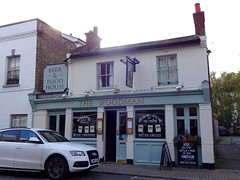 Entry is into a low-ceilinged space dominated by a large central bar offering service on all sides. Around the edges of the pastel-painted wood-panelled walls are mismatched wooden chairs and tables as well as a few low sofas, while the space behind the bar has a couple of larger tables. A large step at the back leads to a restaurant area, ready-laid with wine glasses and cutlery, and beyond this is a part-covered beer garden.

The walls are hung with art for sale — on our visit, this was an exhibition of black and white photos of women smoking, rather a contrast to the more-traditional hops adorning the ceiling above the bar. Smoking seems to be something of a theme here, judging by the cigar menus which sit on the tables.

When Kake and Ewan visited on a Thursday evening in December 2008, three of the four handpulls were on, offering Badger, Tanglefoot, and the seasonal Pickled Partridge (£3.25/pint). They also had several types of Hofbrau (HB), as well as Leffe, Stowford Press cider, and other options. Newspapers and magazines were available for reading.

When Kake visited again on a Thursday afternoon in October 2018, the ales available were Badger Bitter, Fursty Ferret, and Tangle Foot; and a pint of lime and soda was £1.50. There were half a dozen other customers when I arrived around 3:30pm, fairly evenly split between posh-voiced women discussing people called things like Sophie and Jeremy, and old giffers effing and blinding over the sport showing on a flatscreen. '80s and '90s music was playing, not too loud.

According to the Woodman website as of October 2018, food is served noon-10pm Mon-Sun, but according to a member of staff in the same month there's actually a gap from 3pm to 6pm when only bar snacks are available (e.g. sausage rolls, scotch eggs, etc).

In October 2018, Kake tried one of the bar snacks: a spinach and sundried tomato quiche (£3.50) photo. It was OK; the pastry was quite soft and bready, and the filling didn't have a lot of flavour overall, though you could definitely taste the spinach. I would have described it as a tart rather than a quiche, really, since there wasn't much egginess or custardiness to it.

(ilmari previously visited for lunch and dinner several times during 2007, and found the food to be good, but management, chef, and menu all changed in 2012.)

They have free WiFi, which doesn't require registration but seems to work only for web, not ssh. There are at least two usable plug sockets.

Accessibility: A small step to get in, about an inch. A large step to the restaurant area, from which the ladies' toilet is accessed (gents' is possibly on the level with the bar area, but we aren't sure).