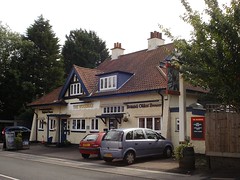 Entry is into a narrow area in front of the bar, opening out to the right into a seating area with upholstered banquettes flanked by dark varnished wooden tables and curve-backed wooden chairs. Stools line the bar. More seating is available up a few steps in two back rooms, one of which has a piano.

Kake visited on a Thursday lunchtime in September 2013. The handpumps were clipped for Spitfire, Master Brew, and Queen Court Harvest Ale, though the latter of these turned out to have just run out. They also had keg taps for things including Samuel Adams Boston lager, Hurlimann, and Thatchers Gold cider. A pint of lime and soda was 70p.

There were a couple of other customers in when I arrived, one just finishing his lunch. A dog was wandering around, seemingly belonging to the pub rather than any customers. Music was playing, not too loud (Absolute Radio '90s).

Food is served lunchtimes and some evenings. Kake tried the mushrooms with stilton, served with potato wedges and salad (£6.20) photo. The mushrooms had a nice texture, and there was plenty of stilton. The potato wedges were a little overdone, with too many hard crispy bits.

The salad was more interesting than your average pub salad, with some nicely cooked and seasoned green beans making an appearance as well as tomato wedges, thinly-sliced cucumber, red onions, and three colours of bell pepper. The tomatoes were quite flavourless, and oddly they'd taken the trouble to half-peel them but had left the hard green bit in the centre. No salad dressing was apparent, but it also wasn't needed as the vegetables provided plenty of flavour.

According to a sign seen in September 2013, they offer two-pint takeouts of cask ale, there's a pub quiz every Thursday from 9pm, and they are dog friendly, with "bags, bowls & bones available".

Accessibility: A step to get in. Once you're in, it's step-free to the bar and some of the seating. The rest of the seating is up three or four steps with no handrail. There's a step just inside the door to the ladies', and the cubicle is quite narrow.