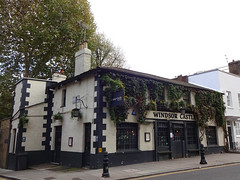 Pub in Notting Hill (though its website prefers to place it in Kensington).

Inside, it's full of character, with a low ceiling, wobbly wooden tables, wood-panelled walls, worn leather-padded bench seating, bulls-eye glass in the windows, and varnished boards on the floor (albeit also an incongruous patch of red lino). Much of the decor dates from the 1930s, as confirmed by a brass plaque on one wall which gives the origins of the oak used in the panels photo.

Perhaps its most unusual feature is the wood-and-glass partitions that divide the space, which would otherwise offer free passage around all sides of the bar. Small doorways in these — all with low thresholds, and some with a high step underfoot — give access to the different areas, some of which are set for diners with cutlery and napkins, and others which are clearly for drinkers. There's a surprisingly large beer garden out the back.

On bob's visit the handpumps were clipped for Sharp's Doom Bar, Fuller's London Pride, Bowland Pheasant Plucker (£2.50/half), and Moles Mole Catcher (£2.60/half). On Kake's visit these four were still on and had been joined by Timothy Taylor's Landlord; and a pint of lime and soda was £1.95.

Kake's scotch egg (£4.50) photo was made fresh, and arrived cut in half on a slate with microgreens and artfully-drizzled brown sauce. It was pretty good, with a nice runny yolk on the egg and plenty of texture and flavour to the sausage coating.

Child-friendliness: They have a small children's menu consisting of pub classics, with just one vegetarian option. There's a pull-down baby change table in one of the ladies' cubicles (gents' not checked).

Accessibility: A small step to get in. Other steps between the different areas of the pub. Steps to the beer garden. Toilets are up a flight of stairs with handrails on both sides almost but not quite all the way up. One of the cubicles in the ladies' is larger than usual.