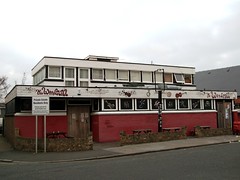 A small live music venue in Brixton, named after a real windmill in nearby Blenheim Gardens (at the end of the road).

It is essentially an estate pub and lies low and squat under the nearby high-rise buildings. However, as it now hosts regular live music nights just about every night, there is almost always an entrance charge. On secretlondon's visit in August 2008, this was £5 and there were three or four live bands on. The headliners finished before the last tube, there was one band afterwards. Music is generally indie rock, often local or unsigned bands, though there are also themed nights for punk, folk or Northern Irish music, among other genres.

The bar area dominates the pub. There is some spacious seating at the back of the place near the entrance and along the side walls (where the toilet entrances can be found), while the stage is at the other end of the room (there is a separate stage door for the equipment at this end). Due to the size of the bar and the presence of tables, and a few inopportune pillars, there is a definite bottleneck while trying to get to the area near the stage, which can be more of an issue when the place is full. However, once you get past this, it's usually more comfortable near the stage.

The beer garden is reached from a door at the north-east side of the pub, opposite the entrance, though it's not always open, in which case there are also tables outside the front door along the street. At one end of the garden, there are two large tables with canopies covering them, and sometimes the ante-room to the side of the pub, with large couches, is also available for sitting in. Occasionally the venue runs all-day events with about seven or eight bands playing inside, and a barbecue at the end of the garden.

Beer is around £3. They have a few lagers (Red Stripe and San Miguel, for example), and despite having four handpumps, only one is ever used, and occasionally (but not reliably) dispenses Marston's Pedigree.