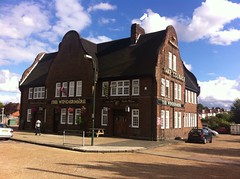 The interior is well worth a look, as it still has the original art deco wood panelling.

bob visited on a Saturday afternoon in September 2013. Although it was the weekend, there were only four other customers there during my visit. According to the member of staff behind the bar, this was mainly because there was no football on TV. The TV screens were showing two different rugby matches and a cricket match.