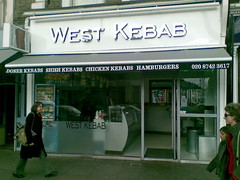 Kebab place in Chiswick. It's mostly geared to takeaway, but there are a few stools you can sit on if you want to eat in.

Bob visited at lunchtime; there were a couple of other customers but I didn't have to wait to place my order. I had a large kafta kebab (£5.50). Although the kafta are advertised as "minced lamb with oriental herbs", the main detectable flavouring was black pepper; enough of it, and it went well with the meat, but not what I'm used to in a kofte. The chilli sauce was pleasingly warm but not overpoweringly so (note from Kake: "pleasingly warm" to Bob means "quite hot" to normal people).

They also do hummous and taramasalata (both £2) plus burgers and other kebabs.

A visitor named Richard adds: "This was very good at beginning but standard dropped since last year, I have tried to come back twice within a month but disappointed with the quality! Will certainly try again as not many kebab shops in W4."