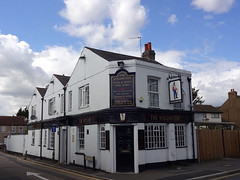 Compact local pub in Bexleyheath, located in the residential streets between Bexleyheath Station and the main part of the town.

Note: According to the June/July 2018 London Drinker, the Volunteer was taken over by a local community group in April 2018. We haven't visited since, so some of the details below may be out of date (though the London Drinker report states that real ale is still available at least).

This small corner pub was clearly once divided into a public and saloon side, but has now been knocked through into a single J-shaped space. The long arm of the J corresponds to the old public bar side, and still has a dartboard along with a reasonable amount of standing space, while the short arm is lined with comfortably padded banquettes.

Flatscreens are mounted over the large fireplaces in each side, themselves now blocked off with cut ends of logs. Decor is traditional but not dated, and consistent throughout the pub, with a patterned carpet, stylised "bare bulb" lighting, and a light grey/dark grey colour scheme. Small-paned dimpled-glass windows let in a reasonable amount of light. There's a surprisingly large beer garden out the back, part grass, part patio, part covered.

Kake visited on a Saturday afternoon in September 2017. There were just two other customers when I arrived a little after 1:30pm, apparently regulars. Music was playing, not too loud. Service was friendly and welcoming.

None of the four handpumps were on, since they were waiting for a delivery, though they did have a few ales in bottles. A pint of lime and soda was £1.90.

Accessibility: A step to get in. No further steps to seating, bar, or toilets, but there's a step to beer garden.