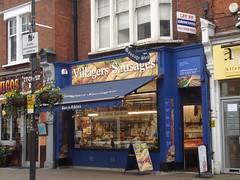 They also offer knife-sharpening services, which Kake takes advantage of a couple of times a year. In January 2014 I was charged £6 for sharpening of four knives, while in February 2020 I was charged £7. They offer free resharpening if you're not satisfied with the result, and they can usually complete the job within a few hours (the longest I've left them is three hours).