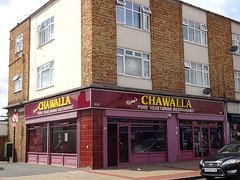 Entry is into a takeaway area with three chairs to one side and a counter in front with sweets and savouries. A long narrow fish tank separates this part off from the eat-in area.

The decor is plain but modern, and the waitstaff use tablets rather than paper and pen to take your order. Metal water jugs and cups sit on the tables.

Kake visited on a Friday late lunchtime in May 2015. About half of the tables were taken when I arrived a little after 2pm, but there was constant turnover of customers throughout my visit. Music was playing quietly via videos on a flatscreen, occasionally interrupted by adverts.

I only wanted a light meal, so ordered the bhel poori (£4) photo, a mixture of crispy deep-fried things mixed with chopped boiled potato and raw onion, chickpeas, roasted peanuts, and a tamarind chutney. The roasted peanuts set everything else off very nicely, and were present in just the right proportion. The chutney was tangy and refreshing. Everything that should be crisp was crisp, and nothing tasted stale. It was a generous portion, and arrived very quickly, which in this case is not a warning sign — this dish is very quick to assemble once you have the components prepared, and they don't suffer from being made in advance as long as they're stored properly.

No service charge was added to the bill. Customers are expected to pay at the till rather than wait for a bill to be brought to their table.

Kakes verdict: I'd come back.

Accessibility: No step to get in, just a ridge, and step-free to the seating. Also step-free to the toilets, which are single large cubicles, though these are through swing doors which swing quite quickly, and there's a relatively tight turn on the way.