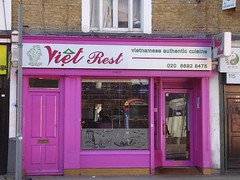 Vietnamese restaurant in Deptford. They also do takeaway.

It's quite small inside, just a single room seating around 30 people at dark wood-effect tables flanked by tall-backed black pleather chairs. Exposed pale wood floorboards are underfoot, and long murals of peaceful water scenes (possibly Ha Long Bay?) stretch along the side walls. A fishtank embedded in the counter at the far end adds interest.

Kake has visited several times now, most recently in August 2019, all on weekday lunchtimes. Each time there were about half a dozen other customers in and every time except one the flatscreen behind the counter was showing Vietnamese news with the sound on.

Prawn summer rolls (nem cuon tom; £5 for four in Jan 2015) photo were nice and fresh, with crunchy lettuce and structurally sound wrappers; I would have preferred more herbs, but this is a minor quibble. The dipping sauce was well balanced, and had some tasty crunchy slices of vegetable in too.

Glutinous rice with braised pork (xoi thit; £5.50 in Dec 2014) photo was also good. The glutinous rice had a good texture, neither soggy nor overly hard, and came with generous servings of pork floss and deep-fried shallots spread over the top. The pork was pork belly, with plenty of flavour both intrinsic and from spicing, and with a good balance of fat to meat. It had been braised for a good length of time, enough for the skin to soften to a beautifully gelatinous texture.

Stirfried glass noodles with chicken, prawns, and vegetables (mien kho hai phong; £6.50 in Nov 2017; £8 in Aug 2019) photo from Nov 2017 were unfortunately a bit disappointing both times I tried them. The overall flavour was pretty bland, and on the first occasion the chicken was so dry that I left most of it (it was improved the second time, but still not great). On the other hand, the noodles had a good springy texture, the green vegetables were still crisp, and the slivers of black fungus added textural interest. The prawns were small and quite thoroughly cooked, but not overcooked. This came with a small bowl of clear soup, which tasted as though there had been pork bones involved in the preparation (a good thing); in November 2017 it was slightly oversalted to my taste, but was fine when I had it again in August 2019.

Accessibility: A ramp to get in. The space by the doorway is a little narrow. Toilets not checked, but seem to be in the basement.