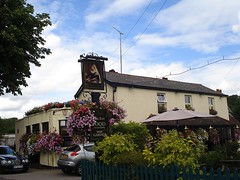 Entry is into a bar area with fairly large tables; up a couple of steps is a dining area which on our Sunday lunchtime visit was already set with tablemats, napkins, and cutlery. There's also a reasonably sized beer garden, some of which is under cover.

According to the 2013 Good Beer Guide, food is served lunchtimes and evenings.

Kake and friends visited on a Sunday lunchtime in August 2013. Five real ales were on: Adnams Southwold, Greene King IPA, Marston's It's A Prince, Sharp's Doom Bar (£3.60/pint), and Timothy Taylor Landlord. A pint of lime and soda was £1.50.

There were a fair few people in when we arrived at 12:30pm, though plenty of free tables; an hour or so later, most of the tables had been taken, as had much of the outside seating. No music was playing.

Kake's smoked mackerel and crayfish salad (£11) photo seemed a bit thrown-together; there was a surprise pile of coleslaw at the bottom of the plate, covered with the type of mixed salad leaves you get in a supermarket bag, supplemented with a few cherry tomatoes and slices of cucumber, and some roughly broken-up smoked mackerel on top with a generous quantity of crayfish in the centre. It was OK. The salad leaves were undressed, though there was a tiny quantity of salad dressing drizzled on the side of the plate; I'd have preferred this to have been actually on the salad. The mackerel had a few too many bones for my liking, the cherry tomatoes were underripe and sharp, and the crayfish was overcooked. None of it was actually inedible, though, and I've had worse in other pubs.

Accessibility: A step to get in. The gents' toilet is on the same level as the rest of the pub, but the ladies' (and some of the seating) is up three steps.

Child-friendliness: They don't have any high chairs.