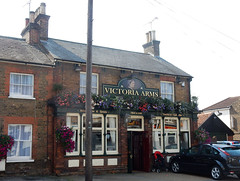 It's very much a traditional locals' pub, with a low ceiling, patterned carpet, padded banquettes, and matching upholstered chairs. Pillars break up the space, creating cosy corners to hide away in. Large flatscreens are mounted on the walls. There's a part-covered beer garden out the back.

Kake visited on a Friday afternoon in September 2015. When I arrived around 2:30pm there were quite a few people in, and plenty of lively conversations going on. No music was playing, and the flatscreens were switched off.

The Brentwood Gold smelt and tasted slightly sour. I'd not had this ale before, so I asked the staff member on duty if it was meant to taste like that, but she said she didn't drink ales so just poured it away and I chose a different ale instead (though she did charge me the 20p difference). The replacement tasted fine and fresh.

A dry-wipe board at the side of the bar listed specials such as pork chops with new potatoes, veg, and gravy; and chilli tacos with sour cream and salad. This also stated that food is served noon-2pm Mon-Fri.

Accessibility: No step to get in. A large step to the ladies', and the cubicle is a bit of a squeeze. A step to the beer garden.