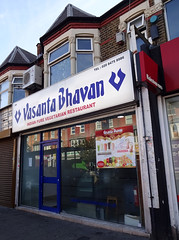 Inside, seating for around 50-60 people is provided by chairs upholstered in burgundy pleather set at tables with wood-effect formica tops. The floor is beige tiles, and the walls a stark white, unrelieved by any decor aside from the occasional light switch.

Like most of the other Indian cafes along this strip, there are boxes of tissues on each table instead of napkins, alongside metal water jugs and cups. It's casual in terms of operation as well as decor; choose your own table instead of waiting to be seated, and pay at the till by the door on your way out instead of asking for the bill.

When Kake visited on a Monday early evening in June 2009 there were a fair few other people in, and others came in for takeaways during my visit. Music was playing, though not overly loudly. I had the mushroom masala dosa (very thin rice/lentil pancake with a savoury filling).

The dosa was crisp, but very greasy. The mushroom filling was very highly seasoned; it would have been too salty on its own but was generally fine with the dosa and chutneys. The accompanying sambar (a thin vegetable curry) was thicker than I've had elsewhere, perhaps more lentilly. Chutneys weren't bad. Overall I preferred the dosa I had at Chennai Dosa down the road, mainly because I didn't like the greasiness of this one.

On another visit for breakfast, on a Monday morning in September 2019, there were two other customers when I arrived around 8:30am and several more turned up while I was there. No music was playing this time, but by 9am there was a decent amount of conversational noise. This time I had the idli (£3.75 for three including chutneys and sambar) photo.

The idli themselves were pretty good; reasonably structurally sound and with a decent level of sourness. The chutneys were flavourful, and distinct from each other in terms of flavour, not just colour. The sambar was fine. Masala tea (£1.50) was pre-sweetened but not excessively so, and nicely milky. Cardamom was evident but not overwhelming in the spicing.

Accessibility: A step to get in, and two more steps with no handrail to the toilet (a single large unisex cubicle with grab rails).