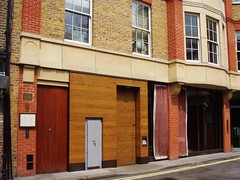 Kyoto-style Japanese restaurant down a tiny back alley near Berkeley Square and Bond Street. It's had a Michelin star since 2005, and gained a second one in 2016, and it's not cheap.

The website gives a pretty good impression of the decor; low lighting, lots of wood and mirrors. The tables for smaller groups are placed against a banquette with very comfortable cushions. There is music, but it's not obtrusive.

On our first visit, we started with a cocktail apiece. The wasabi bloody mary was pretty fantastic, made with tomato juice that had clearly been part of a tomato very recently. It also contained real cherry tomatoes. The nashi cocktail (pear with shiso leaf) was also good, and not noticeably sweet, with the flavour of the shiso coming through clearly. Almost worth the price of £9 each (as of April 2007). Unfortunately the nashi cocktail was rather less good on our second visit, with the flavours of pear and shiso being overwhelmed by the alcohol.

On both visits, we went for the special sushi kaiseki matched with sake (£90 per person for nine courses; matched wines or sakes are £35). On our first visit, the inclusion of a large portion of chirashizushi late in the meal ended up defeating Kake; however, on our second visit the courses were more sensibly sized. The sushi rice was more strongly seasoned than is perhaps usual in London sushi places, but it worked well in the nigiri courses (one "classic", one "modern"), especially as the neta (fish portion) was also relatively generous. We also liked the use of different herbs like shiso, mustard cress, real proper grated wasabi root (as opposed to horseradish dyed green) and various other things that I (Kake) didn't catch the name of, including a stem of small flowers intended for adding to soy sauce for dipping sashimi. The protein course on our first visit was grilled eel; this was good, including the most perfect mangetout I've ever tasted, and a slice of a very interesting type of pepper that again I failed to catch the name of. Being honest, I would have preferred to have some plain rice with this course, and skip the chirashi course, since the eel was very rich. Another highlight was the seasonal appetiser, featuring sesame "tofu" with sea urchin in a bonito broth.

The sake choices were a good match to the different courses, and all of clearly different character. The sommelier explained the background and characteristics of each sake as it arrived; this would have been very interesting had it not been for the fact that he was mumbling and addressing all his remarks to the male of the party. (We had a different and less mumbly sommelier on our second visit.) Each food course was also explained as it arrived, but rather more clearly and usefully (though our waiter in April 2007 seemed more knowledgeable than our waiter in April 2008).

Kake might come back; it's quite expensive here, and to my mind although the food is up to scratch the service is slightly lacking for a restaurant at this level. (I don't mean "oh, they were all Japanese at us"; more that they got a bit overwhelmed when the place got busy.) On our second visit, there was such a large gap between two of our courses that we ran out of our matched sake before the course it was meant to go with arrived - and unlike when this happened at Bacchus once, the staff didn't seem to notice. We asked for a small topup, and this seemed to create quite a kerfuffle; we were eventually given two large glasses of sake, which appeared on the bill. On both our visits, I felt as though we were being slightly rushed through the earlier courses, and I suspect this was because they knew that the restaurant would get very busy later on and they wouldn't be able to provide the required level of service.

So, given this, if you're planning to have the kaiseki menu, I'd suggest coming early, as in 6:30pm or even 6pm, even on a Monday night (our second visit was on a Monday). Also, on both our visits, they suggested we have pre-dinner drinks (cocktails or champagne) and then started bringing our food and matched sakes well before we'd finished our cocktails; so if you do agree to a pre-dinner drink, and you care about whether your food goes with your drinks, it's best to make it clear to the staff when ordering that you'd like a chance to finish your cocktails before your food starts arriving.

The set lunches are more affordable than the evening options, starting at £21 (as of April 2008). We did notice that they offer seven types of vegetarian sushi (£2.50-£4 per piece as of April 2008), all potentially vegan, which might be worth investigating. It's also worth mentioning that they offer a couple of grades of Wagyu beef.