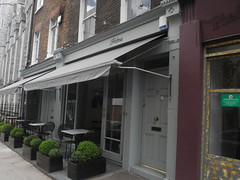 There are several sections to the restaurant: two front rooms with standard table layout, plus a couple of banquettes at the back.

Kat, Ewan and Kerry visited for lunch in March 2013. We opted for the 5-course Koliwada menu (£50 each). This menu gives two options for the main course (Lamb Masala, or a tiger prawn Keralan curry) and for the dessert (Cardamom Kheer rice pudding, or Chocolate Chikki Cake).

First up was a Kohlapuri Jheenga, a ginger shrimp dish with an excellent chutney, followed by Ajwaini Salmon Tikka. The latter was absolutely delicious: the salmon was cooked perfectly and the carom seed crust had an interesting texture — I could have eaten a lot more of it. Course number three was Gilafi Duck Seekh Kebab: this was much spicier and denser than the previous courses, and was probably Kat's least favourite part of the meal.

After all that our mains seemed huge, and were accompanied by a host of good things: Aloo Udaigiri (medium-spiced potatoes), Hyderabadi Dal (earthy, as you'd expect, but with a massive scotch bonnet in the middle for a bit of zing), Beetroot Poriyal (small cubes of beetroot with grated coconut), plus rice and two kinds of breads (a lovely soft garlic bread, and a crispier bread with some powerful chilli flakes). The lamb masala itself was tender, juicy, and extremely filling, but Kat's favourite here was the beetroot and coconut dish.

There is a decent wine list with several options by the glass, plus a cocktail menu including three non-alcoholic cocktails. The booze-free Keralan Mojito (£6.75) was very fruity but thankfully not too sweet. A bottle of drinkable Slovenian white wine was £25. The beer options were rather lacking, unfortunately.

Kat's verdict: while very enjoyable and good value for money, the 5-course menu might be a bit much for lunch. The salmon was the real stand-out though.

Accessibility: toilets are down a rather narrow flight of stairs.