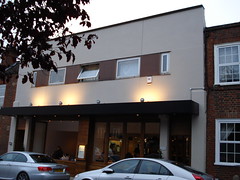 A pleasant and affordable fine dining restaurant in Clapham.

Kake and Bob visited on a Sunday evening in June 2007; the place was fairly empty and so we were invited to choose our own table. It being a fairly warm evening, they'd opened up the French windows at the front of the place; most people were clustered around the front tables, so we decided to sit further back.

We'd seen the tasting menu on their website, but weren't particularly inspired by it; and in any case, it didn't seem to be available, as the only menu we were given offered three courses for £20. With around five choices per course, this seemed a bargain, so we weren't at all unhappy.

Bob started with pig trotter served on a slice of bread. Kake went for the oysters; half a dozen of them, served with a champagne and shallot vinaigrette. Our waiter talked up the vinaigrette quite enthusiastically - and although it didn't perhaps deserve quite this much passion, it was certainly competent, and its acidic crunchiness worked well as a foil to the soft saltiness of the oysters. It's worth noting that our sommelier, who was very friendly in general, was kind enough to bring over - gratis - a small glass of white wine to go with this, pointing out (with no condescension at all) that the bottle of red we had chosen to share wouldn't go well with the oysters.

Bob's main course was roast skate wing with chorizo and chickpeas. Kake had chicken with pesto pappardelle; the chicken was good and moist, though the skin was disappointingly uninteresting, while the otherwise very good pappardelle was let down by the excessive saltiness of the pesto.

We paid a £5 supplement so Kake could have the cheese board; this was exactly as it should be, with a selection of cheeses (you get to choose five) brought on a trolley by a very enthusiastic cheese-lover whose recommendations were generally spot-on. Bob had something involving cherries in multiple guises, including jelly and compote.

The cheapest wine was £18 (and there was lots of choice in the £20 range) and the most expensive were £100-plus. Bob chose our first bottle, and we let the sommelier choose our second; he picked one in the same price range as our first, and we enjoyed it very much.

The staff in general were very friendly and chatty; although this is a "fine dining" place in the sense that everyone involved really cares about the food, it's certainly not stuffy. Reviews suggest that the menu changes often, so I suspect we'll be going back.