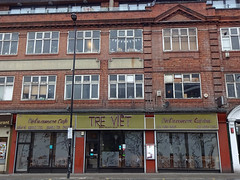 A medium-sized, busy Vietnamese restaurant, one of many situated on Hackney's Mare Street.

Kat and Sarah visited on a Friday evening in March 2017. At 7pm it was fairly busy, but we were shown to a table straight away (if we'd arrived half an hour later it would have definitely been worth booking in advance).

We shared a starter of crispy pork and prawn spring rolls (£6.50) - these were large, nicely crispy and the filling had a good meaty flavour. Sarah's veggie curry (£9) was very good, containing big pieces of aubergine, mushroom and carrot - definitely recommended. Kat's mushroom pho (£9.50) had huge chunks of eryngii and oyster mushrooms and plenty of flat noodles. The beansprouts, sweet basil and sliced pieces of red chilli arrived on a separate plate. Service was extremely efficient but still friendly. Tap water was brought on request. The bill (including 2 Saigon beers and service) was around £21/head.

Kat's verdict: great for a quick, hearty meal before heading on elsewhere. I'd definitely return if I was in the area.

Accessibility: the entrance has a short but steep ramp and a slightly awkward turn to get in. Didn't check the toilets.