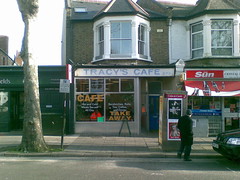 A greasy spoon on Acton Lane in Chiswick.

bob and Jack visited on a Friday lunchtime. While we were there it got quite busy, mostly with builders. The cafe can probably seat 30 people.

bob had set breakfast 6 (£3.75) which came with tea photo. The fried slice was slightly ruined by the juice from the tinned tomatoes but apart from that it was pretty good. Jack had the beef and onion pie (£3.50), which came with chips and peas photo. The chips were fine, and the pie didn't obviously look like a pre-made one which is something in its favour. Jack enjoyed it.