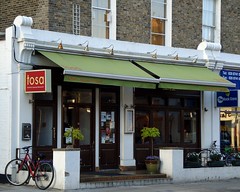 Japanese restaurant on King Street in Hammersmith. They specialise in charcoal-grilled skewers of small tasty things, though they also serve other simmered and fried dishes, as well as sushi and sashimi. The emphasis is on small plates, of which you're expected to order several to make up your meal.

On entering, the place is dominated by the robata grill, which stretches across the room and has a row of seats at the front of it for people who want to watch their food being grilled, sort of like a sushi bar. Other seating is provided by small tables and chairs along the wall and up some stairs at the back.

Kake and bob visited on a Tuesday evening in April 2009. We hadn't booked, but there was no problem finding us a table. The staff were very polite and solicitous throughout our visit, and had no problem with us ordering our dishes in a couple of rounds rather than all at once.

Sashimi moriawase (£13) photo was fine, with generously and precisely-cut slices of fish, though served a trifle cold. Eel nigiri was also a pleasant rendition.

Moving on to the grilled dishes, grilled salmon collar photo was interesting and flavourful, though cooked a little more than Kake would have preferred. Asparamaki turned out to be thick stems of asparagus wrapped in bacon and grilled photo; they were just fine. We also tried the chicken skin skewers and the ox tongue skewers; both were interesting but the former was too fatty for Kake and the latter was a little bland. Shiitake mushroom skewers were good.

We also tried a few simmered dishes. Buta kakuni (slow-cooked pork belly, £5) photo was fine, and the green beans in the dish had taken on the flavour of the pork very well. Dote ni (beef sinew stewed in miso with konnyaku, £4.50) was very pleasing, with the pieces of konnyaku again taking on plenty of meaty flavour.

Along with tea, a beer, and a £27 bottle of sake, the final bill for two was £100. This seems reasonable, since we did have quite a lot of food.

Kake's verdict: I would definitely like to come back and try more of the menu; I've heard good things about the shisomaki (pork grilled with shiso leaf). I also wonder how amenable they'd be to someone popping in just for a drink and a few skewers; I may try this some time.

Tosa also do takeaway, and according to London Eating, they also have a branch in East Finchley which opened in early 2009.

Accessibility: Steps up to get in, and more steps to get to the toilets.