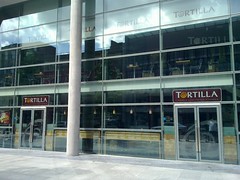 Mexican fast food place on Southwark Street in Bankside. It's the second opening in a small chain, with other branches in Islington, Canary Wharf, and Oxford Circus. They claim to offer California-style Mexican food, rather than TexMex.

secretlondon has been twice now — once on a weekday evening and once on a weekday lunchtime. The atmosphere is quite fast food like; it reminds me of Subway with a hint of Nandos. You queue up at the canteen-style counter and get your food made in front of you from a variety of pre-prepared fillings. At the end of the chain you pay and are given your food in a metal basket to take to one of the wooden benches. If you choose an unlimited drink you are given a cup to take to the dispenser. Cutlery is plastic if you require it — there are no plates.

The first time I visited I had a burrito. You have a choice of fillings — meat from three options, two types of rice, two types of beans, three types of salsa. Steak and guacamole are extra. The chicken burrito was okay (about £6) photo but the medium chilli was unexciting. For my second visit I had tacos — two tortillas with steak and hot chilli. This was more interesting and seemed better value. Since it was lunchtime, the unlimited soft drink was only 40p rather than £1-something too.

There is pop/rock background music. They are licenced — they sell premixed margaritas out of a machine, as well as some bottled beers. In May 2009 they were advertising five bottles of Corona and a bowl of tortilla chips for £20.

Getting here: It's on the ground floor of the Blue Fin building with its entrance onto the street. It is on the part of Southwark Street nearer Blackfriars Road than London Bridge.