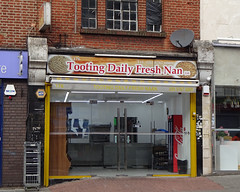 A small shop selling naan bread on Tooting High Street between Tooting Bec and Broadway stations. It does not have a clear cut name - elsewhere on the internet I've seen it called Tooting Today Fresh Naan, and Tooting Bakery. Tooting Daily Fresh Naan seems to be the current name and the others seem to be previous ones.

secretlondon popped in for a naan on Easter Sunday 2016. It advertises a variety of naans (chilli, cheese, cheese and spinach, za'atar, pizza, nutella and others) for £1.50 each. Plain naans are sold in bags of 3 or 4 for £1. You can watch the naans coming out of the oven on a slide, being picked up by the staff who are serving you (with gloves on!) and put on a tray to cool. Dozens of naans were being churned out whilst I was waiting!

I had a cheese and spinach naan (£1.50) and a cheese and za'atar naan (£1.50). I also bought a bag of 4 naans. My naans took a while to come as they were being freshly made in the back. They arrived hot on grease proof paper. I ate them cold later so I cannot say what they were like warm, but they were fine cold. I think I'll try a nutella one next.

In April I did go back and try the nutella one, and I've been buying bags of naan regularly. They do 3 different bags - white naan, wholemeal naan and sesame naan (sesame ones are £1.50). The nutella naan was a hot naan folded over spread with nutella. This was as good or as bad as you'd imagine - I liked it and ended up covered in melted nutella!

The naans it sells are soft flatbreads which last a couple of days, they are not harder tandoor baked naans like you get in Indian restaurants. On my November 2016 visit I found that they have started selling tandoori naan for 3 for £1.25. I do not know whether they have their own tandoor or whether they are getting them from a neighbouring restaurant.

In January 2020 I visited again as I'm back working in the area. They were closed for a fire and have changed slightly. They are now selling shawarma as well as naan. When I was there everyone was queuing for naan, and I think the shawarma are wrapped in naan.