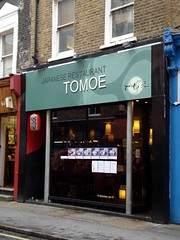 Small Japanese restaurant one block north of Oxford Street. It's located on Marylebone Lane, at the Wigmore Street end.

Kake visited on a Wednesday lunchtime in December 2007. Very friendly and prompt service — I was greeted enthusiastically and there was a (complimentary) cup of tea on my table almost before I sat down.

I ordered the sashimi set lunch, which was £10 and included 13 pieces of sashimi (tuna, salmon, mackerel, prawn, and sea bass), a green salad, rice, pickles, and miso soup, all of good quality photo. I also had a couple of glasses of wine (£2.50 for 125ml). My final bill was not itemised, and was £2 higher than it should have been, but this was sorted out promptly (an anonymous commenter in April 2010 notes that this happened to them as well).

I was seated in the ground floor section, which has seating for about 30 people. There's a downstairs part too, which has a sushi counter where you can interact with the chefs, but I think it might only be open in the evening.