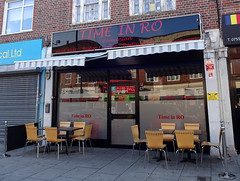 Romanian restaurant in Morden. They also do takeaway.

It's a small space, located in a parade of shops on a side street. Tall fake flower arrangements sit atop pink linen cloths on the tables, black and red stretch covers adorn the chairs, and elegant matte black lampshades hang from the ceiling. Murals are painted on the walls, including one showing a view of the street outside in 1947.

On our visit, the seating arrangements seemed to be aimed at larger groups; there were four tables for eight people each, one for five, and one for two. However, looking at the photo gallery on their website, it looks like these can be reconfigured for different distributions of customers.

Kake visited for a takeaway on a Monday afternoon in November 2017. Unsurprisingly, there were no other customers when I arrived around 2:45pm. The flatscreen in corner was showing daytime TV in (presumably) Romanian with the sound on.

Sarmalute cu mamaliga si smantana (stuffed cabbage leaves with polenta and sour cream; £9.80) photo was OK. The polenta was quite bland, but had a nice coarse texture. The cabbage rolls seemed to be home-made - they were of various sizes and the cabbage leaves of various shades of green. The meat inside was coarsely minced and had a decent enough flavour. Overall, though, it was a bit dull. For some reason they'd not given me the sour cream listed on the menu, which would have helped a lot.

Kake's verdict: I was a bit disappointed, but would give it another chance if I was in the area.