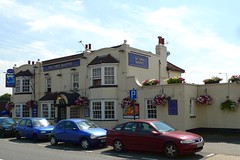 A pub on the borders of Heathrow Airport near the hotels on Bath Road. It is owned by the Spirit Pub Company.

The pub is quite large and roomy, and has a pool table along with a couple of TVs.

When bob visited in March 2008, the food was cheap, and they served an acceptable pint of London Pride for £2.76. Subsequently it was rebranded as a "John Barras" pub.

When John visited in August 2013, it was very full (due to a convention at a nearby hotel). They said that it would take 45 minutes to prepare any food. They also asked people to get a table number before ordering food, even though not all the tables had numbers. They charged £4.07 for a pint of Strongbow, which seemed quite steep.