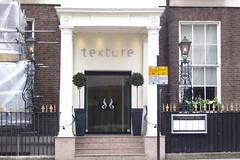 Upscale restaurant just off the Marble Arch end of Oxford Street. It received a Michelin star in 2010.

The food is of the kind usually described as Modern European; it's more northern Europe than southern (the head chef is Icelandic). They have a small bar at the front, which specialises in champagne; you can have a drink (and bar snacks — see below) in the bar without having a meal too.

Kake and Bob visited on a Tuesday evening in February 2008. We'd booked online via Open Table, which for some reason had only offered us the choice of 6:30pm or 9pm; not sure if this was a bug or if those are the only sittings that the restaurant makes available to online booking services. We chose the 6:30pm option, and the place didn't start filling up until we'd been there for a while; also, we were certainly there past 9pm, and didn't feel pressured to let them turn the table.

We started with a drink in the bar; minor criticism here in that Kake's mineral water was about three-quarters ice. We were brought a selection of bar snacks with our drinks; bacon-flavoured popcorn, and a quartette of "crisps" - potato, parmesan, baguette, and cod skin - with wasabi and lettuce emulsion and yoghurt and barley dip for dipping. The bacon popcorn was OK, though not very bacony. The crisps were better, though the potato ones could have been crisper, and the parmesan and cod skin in particular were rather too brittle to scoop up the dips with. The wasabi in the wasabi dip was very, very subtle, though the slightly foamy texture was interesting.

We were brought menus and wine list while still in the bar, and decided on the five-course tasting menu (omnivore option - there's a fish-only option too, but not a vegetarian one).

Moving in to the dining room, the meal proper was preceded by a lovely amuse bouche of pickled herring with onion and dill cream on sourdough toast; just right.

Second course was pigeon; cooked quite rare, lovely and tender. The accompanying roasted shallot, balsamic vinegar reduction, and sweetcorn puree meant that this course ended up being fairly sweet. It also came with some more of the bacon popcorn that we'd not been very impressed by earlier; this seemed an odd repetition, and one which didn't really add to the dish.

Third course was monkfish with passion fruit and grapefruit. This was, again, a fairly sweet course; not necessarily a good thing coming on the heels of the previous one. The monkfish was perfectly cooked, though.

Fourth course was the pig one; 12-hour braised pork belly, pork crackle, and roasted suckling pig. The pork belly was excellent, tender and flavourful, and the tiny mushrooms that came with it were also lovely. The pork crackle and suckling pig were less interesting (and Kake gave half of hers to Bob, who said that the skin on his was nowhere near as crispy as that on mine - odd). One unusual component of this dish was a small rectangle of squid, which was perfectly cooked (not sure when I last had squid that had a different texture on the surface and in the middle - top marks). Lightly pickled mooli on the side made a good contrast to all the richness.

Next was the optional cheese course; they ask you during the meal if you'd like this, and you get to choose between ewe's milk, cow's milk, and goat's milk cheeses, and you get three of each, one of which will be blue. Bob chose ewe, and felt the selection was slightly dull; he got manchego, roquefort, and something else. Kake chose goat, and was better pleased; in particular with the blue, which was not too goaty and not too blue, but well-balanced (and apparently the only blue goat cheese produced in the UK).

Our pre-dessert came in shot glasses; blood orange sorbet in the bottom, then blood orange segments, then sabayon (a foamy cream concoction) on top. This was a bit odd; having the sorbet next to the non-frozen pieces was rather reminiscent of what happens when you put an orange too close to the back of the fridge and half of it freezes... but it wasn't unpleasant.

Finally, the dessert was fantastic, and I say that as someone who's usually quite uninterested in dessert. Lemongrass and ginger soup with (coconut?) sorbet; it also had a piece of (braised?) fennel in it, and tiny rocket and mint leaves. I accompanied this with a glass of quite awesome dessert wine, recommended as being "a bit like Tokaji". Bob had some port - 10-year-old Taylors tawny (the only port on the menu).

Bread was on offer throughout the meal (they came round at least three times). Kake had some very good sourdough (and I'm fussy about my bread); Bob tried some other options including a not-very-exciting semolina roll. Bob did the wine-choosing; he says the wine list was quite varied in both price and style.

Service was very good; informative but not patronising, and well-practised but not standoffish. Dishes were described to a good level of detail, and additional questions were answered immediately with no need to go and check with the kitchen. There was one slight problem in that they prefer to take your wine away and bring it back to pour; and when it got busier in the latter part of the evening we were left with empty glasses for quite some time despite having wine left in our bottle.

Decor: nice room - high, ornate ceiling. Slightly confusingly, the loos are shared with the hotel above.

Kake's verdict: Although not everything was perfect, I did have a great evening and will happily come back.