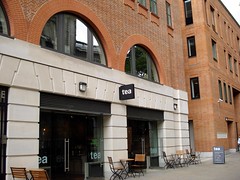 Modern-style tea shop in St Paul's Churchyard. There's seating for about eight people outside, and more inside. The inside seating is a combination of small tables plus one longer communal table near the windows at the front. They open up part of the front in good weather to let the breeze in.

As well as a range of black, green, and white teas, they also serve breakfast (e.g. toast, English muffins, croissants - and they do have Marmite!), lunch (e.g. sandwiches) and various baked goods (e.g. brownies, cookies).

Kake visited on a Thursday morning in June 2008. I had a pot of Dragon Well green tea (£2.75 for two generous cups' worth), and a double chocolate brownie (£1.50). The brownie had plenty of nuts in, and was very gooey and quite sweet photo. (Note that I am no brownie expert, and indeed this is probably the only one I've eaten or am going to eat this year.)

The tea arrived in a pot with no leaves, ready to drink; I'm not sure if they used one of those infusers that you put the leaves in and then remove from the pot or if they brewed the tea in something else and transferred it to the pot to serve it. In any case; it wasn't brewed entirely to my taste. It was fine for having with the brownie, but on its own I felt it was too bitter.

I was there around 11am; it was fairly busy though there was still seating available both inside and outside. Service was friendly and helpful, but they didn't seem too assiduous about clearing the tables of previous occupants' crockery. Background music was playing just too quietly to be identified or listened to, but just too loudly to be completely masked by the hum of the fridge.