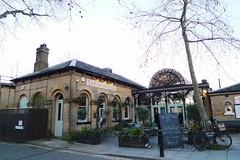 Pub right next to Kew Gardens Station. It was acquired by Fuller's in 2009, and in late-2013 was given an overhaul and renamed from The Railway, its original name photo.

The main part of the pub is quite dimly lit, but there's also a large conservatory with exposed brickwork, a worn tiled floor, a huge arched ornate skylight photo, and floor-to-ceiling picture windows looking directly onto the eastbound platform of the station; this space can be booked for private parties, which confines drinkers to the seating around in the main bar room. There's some outside seating too, some of which is covered with a large parasol/umbrella.

There are four handpumps in the bar, which on a January 2014 visit had a standard range of Fuller's ales along with their Jack Frost seasonal ale.

On Kake's Wednesday early evening visit in August 2008, there were a fair number of customers and most of the outside seats were taken, but I had no problem getting a table in the conservatory. Background music was playing, pretty bland but not loud enough to be annoying. Ewan had no trouble getting a table on a rainy Saturday in November 2008 either, though the conservatory was rather draughty and cold. Sport was on the TV, with the sound on in the inside area by the bar. On a Friday lunchtime in July 2013, there were a few people in around noon but plenty of space both inside and outside.

In July 2013, Kake's brie and tomato sandwich on granary bread (£5.50 including tortilla chips and salad garnish) photo was pretty good; the bread was firmly-textured, almost sourdough-like, and the fillings were generous and fresh. The tortilla chips were also a generous portion. The salad was properly dressed with a reasonable vinaigrette, but unfortunately some of the leaves seemed a bit bashed-about.

Child-friendliness: A sign seen in August 2008 said children are welcome in the conservatory until 7pm, and there were a number present on Ewan's January 2014 visit. As of July 2013 there's a children's menu photo with an activity sheet (puzzles and colouring-in) as well as at least two highchairs (without trays).

Accessibility: One step at both entrances. Step-free to bar and seating once you're in. Toilets are in the basement, down a straight flight of stairs with a sturdy handrail on both sides. The cubicles in the ladies' are a bit of a squeeze to get into.