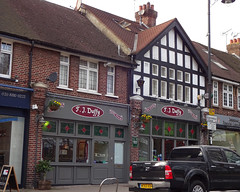 Nice little pub very close to Northfields Station. It was originally converted from a single shop front, but took over the bric-a-brac shop next door to become a decent size, with a garden.

Food is served pretty much all day Monday-Saturday: between noon and 2:30pm you can choose from a daily roast and various other pub standards; an evening menu is served between 6:30pm and 9:30pm; and sandwiches and snacks are available from 11am to 9:30pm. Sundays, they offer a traditional Sunday lunch between noon and 4pm (no food Sunday evenings). They also hold curry nights and steak nights.

Kake visited for lunch on a Wednesday; the place was practically empty but the barmaid was friendly. I had ham, egg, and chips photo (£6). The ham was a generous portion, and thickly cut; and the egg had an almost-runny-enough yolk. The chips were nothing special - certainly not hand-cut - but cooked competently. Accompanied it with a pint of Doom Bar (£2.60). They sometimes have London Pride, I think, but not on this visit; the other choice was Adnams Broadside (also £2.60, I think).

They rotate their beers quite regularly and sometimes get in brews from the smaller local brewers. Beer quality is variable and depends very much on the popularity of the beer in question - at it's best it is very good indeed, at worst not very good at all.

They have a few chairs and tables on the pavement outside, and a part-covered beer garden out the back. The enormous stack of ashtrays near the beer garden door suggests that it's popular with smokers.

Although there were only three other customers there on my visit, it can be a lot livelier in the evenings - it's quite variable though: packed one night and totally empty the next.