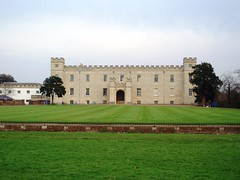 This park surrounds the London home of the Duke of Northumberland, one of a handful of stately homes within easy reach of London via public transport.

The house is open between mid-March and late October on Wednesdays, Thursdays, Sundays and Bank Holidays between 11am-5pm. The gardens are open every day from 10:30am until 4pm (or dusk, if earlier) in winter and 5pm in summer. A ticket for the gardens is £4; include the house and the price rises to £8.

In October 2008, [calliope]? and elvum chose to only visit the gardens, although it looked like the house would be worth a visit on another occasion. The gardens are reasonably well kept, and very pretty. They are much less manicured and well kept than Chatsworth, for example, but that might be in part related to the time of year. It may also be a sign of the more limited visitor numbers; we probably met around 10 other people in the gardens when we were there (on a Sunday in October). It would have been very peaceful and private, apart from its location right under the Heathrow flight path.

The profusion of wooden carvings are interesting and add to the natural scenery. We found a plethora of photographic opportunities, which is why we went. We had a pleasant walk. The paths were well made and plentiful, but nobody seemed to mind us deviating from them. There were plenty of benches and other places to sit.

Kake adds: for the past couple of years, there's been an "Enchanted Woodland" lighting display set up in the gardens around November-ish, which is well worth a look; see my photos from 2007.

Food provision is somewhat limited. There is nowhere to get food inside the house or gardens. The site has a garden centre attached, which has a cafe, though sadly it isn't a very good cafe. [calliope]? and elvum visited for a late lunch on a Sunday afternoon in October 2008. Options were a selection of melts, priced at around £5, and jacket potatoes with a variety of fillings for a similar price. They also had a selection of cakes. A bacon and mushroom melt was disappointing, with cheese, tinned mushrooms and cheap salty bacon inside a yeast-flavoured white torpedo roll, microwaved for thirty seconds and then pressed and browned briefly in a panini grill. We also tried the bread cake, which looked wonderful, but sadly did not live up to expectations. The format is self-service cafeteria. Service was very slow, but polite.

The garden centre (a branch of Wyevale) is large and well stocked. It also contains an "eco shop" selling all manner of eco-lifestyle goods and a very large range of compact fluorescent light bulbs.

Getting There: There are regular buses (237 or 267) from either Gunnersbury or Kew Bridge going past the end of the lane to the visitors' entrance. It is worth noting that the bus stop for the park is, contrary to what it says on the website, Brent Lea.