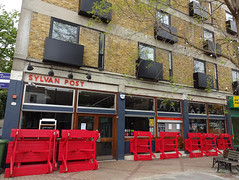 It was previously operated by Antic, but in late 2020, a notice appeared on the Sylvan Post website stating that several pubs, including this one, had been taken out of the hands of Antic and transferred to the management of Portobello Brewing. In November 2021, Portobello announced that it had acquired the freehold. We haven't visited since the transfer, and so some or all of the details below might be out of date.

There's something almost continental feeling about this space, rather like a cafe which happens to offer draught beer. The front room, housing the simple wooden bar, is large, light and airy. There is stone tiling on the floor, about four booths to the side of the space, and a high tables with stools stretching out to break up the room in the middle. There are also smaller, almost canteen-style tables dotted around. The decor is post office themed and has some original features. The post office closed in about 2008 (photo before conversion).

To the rear of the bar on either side are smaller rooms, the old offices, including two vaults still with very solid steel doors and now fitted out as snugs with small tables and chairs inside for the claustrophobic. The one to the left of the bar has a wall plastered with Ordnance Survey maps.

On Ewan's Sunday afternoon visit in March 2012, the place was populated with groups of parents with children as well as younger residents of the area. When Kake, Kat, Sarah, and Jo visited on the afternoon of Mothering Sunday a year later, most of the tables were booked and there were plenty of small children in evidence too.

The bar has around four handpulls for ale (dispensing dependable ales by a mix of local and regional brewers, including Twickenham Ales, East London Brewing and others). In March 2012, Ewan's half of ELB Nightwatchman (£1.60/half) was a fine, well-kept beer. In March 2013, a pint of Everard's Tiger was £3.40 and a pint of lime and soda was 60p.

A food menu is available, cooked in a kitchen whose counter is located at the side of the main room. On a Saturday lunchtime visit in March 2013, Kat tried the fishfinger sandwich (excellent value at £4), which came on white bread with mayonnaise, plus a pile of properly-fried chips. It went very well with a pint of Everard's Tiger. Rick had a good but rather tomatoey shepherds pie (£10) which came in a decently-sized bowl, with sauteed leeks on the side.

When secretlondon visited in November 2016 there were 5 hand pumps and 10 kegs. Volden session ale was £3.30 a pint. Music was playing.

According to a board seen outside in March 2013 and confirmed in November 2016, quiz night is every Tuesday.

Accessibility: There is an accessible toilet without a RADAR lock.