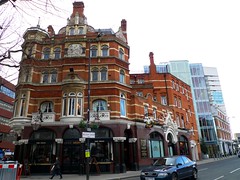 Directly at the entrance is an area of high chairs and tables, divided up with ornately carved wood and glass partitions. There's a fruit machine in the corner here too. Further in towards the bar is an area with normal chairs and half a dozen tables, along with a small sofa/armchair cluster perched on a patterned rug. Another partition sets off an area towards the back with banquette seating and slightly larger tables. A staircase sweeps upwards towards a table-service dining room.

Like many Nicholson's pubs, the decor is on the ornate side, possibly erring in this case towards overly busy. The space is broken up by pillars and partitions, and the ceiling is painted black with gold mouldings. A rail around the base of the bar is supported by stylised griffins.

Kake and a few friends visited on a Friday lunchtime in September 2012. There were six real ales on: Ilkley Mary Jane, Roosters Yankee, Nicholson's Pale Ale, St Peter's Mild (£1.80/half), Kelham Island Pale Rider, and Windsor & Eton Knight Of The Garter. Lime and soda was a pleasingly reasonable 75p/pint.

There were around a dozen other customers at 12:30pm, with a few more wandering in as lunchtime stretched on, though there were always plenty of seats available. Music was playing; slightly too loud to tune out if on one's own, but quiet enough not to impede conversation.

According to their website as of September 2012, food is served 10am-10pm Mon-Sun, from a standard Nicholson's menu. We tried several options, including the fish pie (£10) photo and the chicken & mushroom pie (£9) photo. The latter was not a true pie (which has pastry all the way around), but rather a stew in a ceramic dish topped with a pastry lid. It was a reasonable example of the genre, however, though the gravy had split photo and the chicken content consisted entirely of rather dry breast fillets. The accompanying roasted vegetables (butternut squash and carrot) were quite dried-out, but the mashed potato was fine.

Kake's verdict: A fairly standard Nicholson's, but a reasonable choice for the area.

Accessibility: Tiny step to get in, more of a ridge really. Once you're in, it's step-free to the bar and all ground-floor seating once you're in. However the toilets are up a flight of stairs, with sturdy (yet hard-to-grip in places) handrails on both sides.